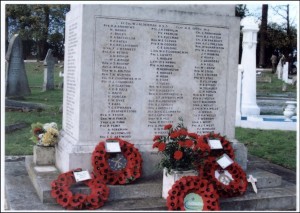 THIS IS VERY MUCH WORK IN PROGRESS AND ANY ADDITIONAL INFORMATION OR CORRECTIONS WILL BE GRATEFULLY RECEIVED.

The Society’s Pamphlet 19 lists those who are known to have been born in, or who lived in Snodland who fought and died in the Great War. Those in normal type are commemorated on the War Memorials in All Saints church and the cemetery, or the one in Christ Church (formerly Lower Birling). They are included again here with names in bold. Entries of casualties in italic are known to have had Snodland connections (i.e. were born here), but are presumed to be commemorated on other War Memorials. Some of the sources contradict each other. We warmly thank many relatives and friends for information and pictures already incorporated here.

The digital version of the Kent Messenger 1914-1918 has been searched and presents much new information, now added. [KM = Kent Messenger in text. Although many of the KM photos reproduce poorly, they have been included as a record.]

It is much more difficult to find information about those who fought and survived, but this is a first attempt to do so. We have drawn upon various sources, none of which is complete:

(a) Three Roll of Honour lists were published in the Parish Magazine in 1914 and 1915. Names were notified to the Rector and some details may be inaccurate. Two of these seem to have been taken from the Kent Messenger on 5 and 10 October 1914.

(b) Surviving Service Records and Pension Records for soldiers, held at the National Archives are available for downloading through Ancestry.co.uk. There are about 130 of these. The series was bombed during World War II and what survives is fragmentary. Individual records now range from a single sheet to more than sixty, many torn or with severe water damage blotting out some of the script. The card index of medals awarded is of no help unless we can link the information to a particular person, a known regiment or service number, so has not yet been properly researched.

(d) Naval records are held at the National Archives and have recently been added to the Ancestry web-site.

(e) The Roll of Honour published by British Portland Cement Manufacturers Ltd. Includes the local factories of Lee, Son & Co. and Peters’ Works. There are some discrepancies in the information between this and official records, but both casualties and survivors are recorded in the BPCM lists.

(f) Snodland Millennium Museum holds what survives of the early records of the local British Legion in the 1920s. We have a list of 73 names and addresses (only), but also some application forms, which include name, address, regiment or ship, date of joining, date of discharge, rank, and trade or occupation.

(g) The baptism registers of All Saints and Christ Church record many soldiers, sailors and munition workers. So do the marriage registers, but often in the latter it is not clear from the entries whether the couple resided in Snodland (it being normal practice for the marriage to take place in the bride’s parish). I have looked for confirmation from other records where possible.

A branch of the Royal Army Medical Corps (Volunteers) was formed in Snodland during the early 1900s and paraded twice weekly. Many men from it joined at the outbreak of the war. Prior to this a Snodland branch of the 1st Kent Artillery Volunteers was active, with 60-70 members around 1900. Several of these transferred to the Regulars.

We summarize what the records above show in the following list. Where possible family details have been supplemented by those from our own database and from information supplied by family and friends of the men. We have the boys’ admission register of the C of E School, Brook Street, (1904-1916) with dates of birth recorded from 1897, so these have been added when found.

The original service pension will usually provide more detail than is shown here (copies are at Snodland Millennium Museum). There are numerous images which have not been copied, such as blank pages or receipts for medals. There are also a good many duplicate forms and pages, again not copied.

A certain amount of guesswork is involved (usually shown by a ?) and the numerous discrepancies between sources invoke many questions.

I am very grateful to Tony Grant and Richard Szwed for much help and encouragement and especially for Richard’s photographs of graves and memorials on the continent. I also thank Michael Mearns who contributed further information gleaned when he was researching the men from Leybourne.