Water is the key to Snodland’s beginnings. Water to drink, from the two streams at either end of the parish: the one at the north serving the community at Holborough, and the other at the south supplying the needs of the first villagers. Water as a natural barrier, in the form of the river Medway, but which at this particular point could be forded at certain times. Water, moreover, which eased communication with other river-side dwellers in higher or lower reaches. But one could have too much water at times of flood and the parish is sited at the point where the river cuts through the North Downs and where gentle slopes keep flooding at bay.

The Medway valley has been inhabited since prehistoric times and Snodland is surrounded by memorials of Early Man. Most striking of these are the Neolithic burial chambers of Kit’s Coty and the Countless Stones at Aylesford, and the Coldrum Stones by the Pilgrim’s Way near Trottiscliffe. In August 1912 in the neighbouring parish of Halling workmen found the skeleton of a man dating from about 2000 BC. 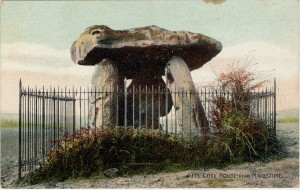 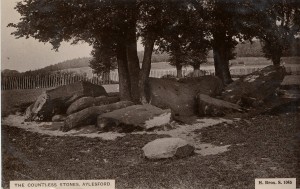 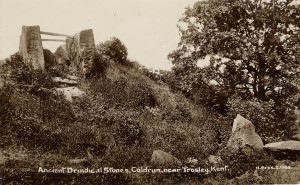 It was not until 1952, however, that evidence of prehistoric man in the parish itself came to light. Old photographs of the hill at Holborough show both its summit – a little over 200 feet high – and, further down the slope towards the river, the raised hump of a well-recorded Roman tumulus. To villagers of recent times the hill was known as ‘Holborough Knob’, although in earlier centuries it was more generally called ‘Barrow Hill’. One part of the area, at the highest point, was curiously named ‘Monk’s tippet’. Since a tippet is a collar, this probably referred to the collar of trees and shrubs surrounding the summit. All has now been eaten away by chalk excavation. Indeed it was just these excavations which cut into a hitherto unknown Saxon cemetery and which simultaneously revealed a prehistoric ring ditch. The outside diameter of this ditch was about 100 feet and it is thought that it may have been part of the construction of a round barrow, which formerly incorporated a mound or bank. No trace of a burial was discovered at the centre of the circle, but this may originally have been laid directly on to the chalk at ground level and have been dispersed later as the ground was ploughed and re-ploughed. Some bones found in the ditch may be human, suggesting that there was a secondary burial. The uppermost layers of the ditch contained various types of pottery fragments ranging from the Late Bronze Age to Roman times.

‘Holanbeorge’ is mentioned in the earliest surviving charter relating to the parish, dating from 838. The Old English beorg denotes a hill or mound, especially a burial mound, while Hol correspondingly refers to a hollow. It is no accident, therefore, that among the earliest families of the parish whose names are recorded is that of Holloway, living in the valley at Holborough (as it became) at the foot of the hill. Clearly the two barrows – one prehistoric and one Roman – would have been major landmarks in the area and would attract a special name like ‘Holanbeorge’.

The barrows were sited beside an ancient trackway. This had run along the foot of the escarpment at the spring-line, through Trottiscliffe and Paddlesworth, but it deviated here to run down to the river, crossing at Holborough to run south-east past the numerous megalithic monuments towards Boxley. Higher up, the track now called the Pilgrim’s Way ran on through Cuxton to cross the river at Rochester. On the hills above Paddlesworth it was once joined by an even higher route which ran along the summit of the Downs. It seems likely that these ways were used by Early Man to move himself and his animals – much as still occurs in some primitive parts of Europe today. Shepherds and sheep would keep to the highest routes, while the cattle would need the water-bearing springs at the lower level. Both would be able to move more easily in these less-densely wooded areas above the heavy Gault Clay and Greensand levels.

There has been much speculation about the river crossings. It is clear from geological studies that the valley floor has changed radically since prehistoric times. With the ending of the Ice Age the sea level rose, forcing the Medway to slow down and deposit much gravel in its own channel instead of in the sea as formerly. From about 10,000 years ago the influence of tides was first felt at the mouth of the Medway and they gradually penetrated further and further inland. This in turn caused further deposits of alluvium over the gravel and formed the salt-marshes which are present today. However, the evidence from borings suggests that the alluvium layer was not formed until after the river crossings had come into use.

It has always been assumed that Rochester stood at about the limit of tides and that a prehistoric crossing existed there. Holborough may have been too difficult for sheep, but two tracks converge to cross the river here: the one past the two barrows and the other, slightly further to the North, descending straight from the hills. The latter forms part of the Halling-Snodland boundary and may be a route made or improved by the Romans to connect (eventually) with Watling Street towards the west. Perhaps in time, as tides continued their advance, the Holborough crossing became unreliable. At any rate a further route was later opened up, for tracks branching off both of those to Holborough make instead for Snodland. Here, even today, is a feature in the river bed known as the ‘Snodland Rocks’ – ‘a bar of iron-cemented conglomerate, with large and small flints and pebbly material visible at low tide’. It has been suggested that this feature, which does not seem to be a natural formation, is what remains of the track between Snodland and Burham. The great S-shaped meander in the river, if it existed at all, would have been further upstream; it is more likely that the river flowed past this point in a number of different streams until the alluvium was laid down.

We may assume that such an important location would encourage settlement nearby, especially since the meeting of the hills and river valley afforded a wide variety of soil and terrain. It is likely that a few round huts were scattered along the valley during the Iron Age, each the home of a farming family. Traces of such settlements are rare, however, and it is only exceptional discoveries like those of Halling Man and the Bronze Age circle which point to their existence.