From the middle of the fifteenth century, a wealth of documentary material becomes available – in particular a steady stream of wills which introduces us to the principal parishioners. These wills are supported by a number of deeds concerning property and land. One of the latter, made on 24 September 1460, is especially illuminating. It says (in Latin):

By a fortunate chance surviving deeds show that ‘Benet’s Place’ was a large house sited at the junction of the Paddlesworth and Birling roads (immediately east of the “Monk’s Head”). In 1817 this was bought and turned into a group of separate cottages for farm labourers by Thomas Stevens, farmer of Paddlesworth; in more recent times they were known as ‘Dodnor’ Cottages (now demolished). From this we can further deduce that John Sevare is likely to have lived at ‘Woodland’s Farm’ and Richard Palmer at the ‘Bull’.

Who were these men? We can learn a little from their wills. Thomas Parmenter had died in 1459. Like many others, his will included a bequest of money for repairs to the bridge of ‘Blakebroke’. Maintenance of parish roads and buildings was entirely the responsibility of the inhabitants and it was imperative that the wealthier inhabitants saw to it that money, material and labour was available for such work. In his turn, in 1461, Thomas Benet asked to be buried ‘att ye Westdorr of ye Chyrch of Snodland’, adding ‘I bequeth to ye makyng of ye same porch 4 mark of mony’ [about £1.35]. Simon Spayn’s will of March 1467 specified: ‘I give to repairing the King’s highway between Jolyff’s Crosse and the ‘mansion’ which was lately Thomas Goseler’s, where most need is, 12s. [60p.] And to repairing the ways between the back cross and the church of Snodelond, 12d. [10p.]’. Spayn’s house was at ‘Burgate Cross’, perhaps the old house (now demolished) on the corner of the High Street [once ‘Burgate Street’] and Holborough Road, and he owned another house called ‘Fynderus’ together with other property in Snodland, Birling and Paddlesworth. In 1457 John French gave some virge-stones to mend ‘the highway leading towards Mallyng’ and ‘between my house and the house of Roger Stalworth’. But it was not only the well-being of their fellow men which concerned them, nor the disposing of their worldy goods to their kinsfolk and friends. Their spiritual life was strong and the well-being of their souls too needed appropriate consideration. Money for the burning of candles before the many images in the church is a common feature of many wills, whether to ‘Our Lady in the North Chapel’, ‘Mary Magdalene’, ‘Our Lady of Piety’, ‘St. Stephen’, ‘St. James’, ‘The High Altar’, or to others. John Pole (1487) gave 6s. 8d. towards the

‘Chapell of our lady in the north side of ye church of Snodland … Also I bequeyth to a tabell of alabastr for ye autor in ye seid chapell a 40s for to pray for John Haw, Christopher Haw and for the soulis of John Pole and John Cotton. Also I will that myne executors by a stone to ley on my grave wtin a yere of my decease. Also I will yt ye best crosse in Snodland Church be amendyd on my cost. Also I bequeyth 10s. to bye a pyx for the blyssyd sacrament in the sayd church.

In particular there are innumerable bequests to ‘ye croslytt’, no doubt illuminating the marvellous incised crucifix on the pillar. In 1457 John French gave a considerable sum, 13s. 4d. [67p.], ‘to provide oil to burn in the lamp before the image of the Holy Cross for ever’. Donations were given to the Augustinian Friars in London (but why them especially is not known) and to the Carmelite Friars at Aylesford. It was customary to pay a priest to say masses for one’s soul, particularly one month after death and on anniversary days, and some goods, bread and drink might be allocated to the poor ‘for the good of my soul’. Money for ‘the making and mending of the shrine of the figure of the Blessed Virgin Mary’, the donation of a cloth to cover the image of Mary Magdalene to protect it from becoming defiled and unclean’, ‘a beautiful book of pleas and diriges’, and ‘a chased gilt cup’ are among other bequests to the church at Snodland, together with more mundane offerings to repair the churchyard wall and the like.

In his will of 20 November 1472, Thomas Usher asked to be buried in the churchyard of Snodland next to his father. Most unusually for the time, he specified that a commemorative stone be installed:

‘I will that myn executors by a stone to Cowvyr my fadeys grave & myn & that my fadyrs name & myn be wryttyn ther uppon for a p[er]petual remambrance & memory that all men & women that rede or se it pray by in way of Charyte.’

After all these years, no trace of it remains.

Although the names of about 100 Snodland men are known from this period, scarcely one has a named occupation. All of them worked principally as farmers or small-holders, of course, but the skills of carpenters, masons, millers, blacksmiths and other trades would also have been available to the community. William Boteler, of Norwich, describes himself as a ‘barbour’, but his will is concerned with the disposal of the land he owned in Snodland. He remembered to bequeath 33s. 4d. ‘to the church where I was born’. Henry Scryvener (d.1477), was a miller, but his own property was in Wateringbury.

Old books on Kentish history make much of the association of the Palmer family with Snodland. Foremost among these (and drawn upon by later historians) was Thomas Philipott who, in his Villare Cantianum (1659), wrote:

‘The Courtlodge by the Church, was, as high as I can by the Guide and Direction of Evidence trace out, the Palmers, as appears by very ancient deeds, sealed with a Cheveron between three Palmer’s Scrips. William le Palmer, who was Owner both of this and Rye-House in Otford, flourished here in the reign of Edward the third [i.e.1327-1377], and stood depicted in the Church-Window, with the above-recited Arms on his Tabard or Surcoat, untill some rude hand defaced the Signature.’

It would be good to find some of these ancient deeds with their seals, but they have disappeared and we have to take Philipott’s information on trust. Even the church memorials have gone. John Weaver [1631] set down an epitaph, missing even then from the gravestone in the chancel:

I, a Palmer, livyd here

On the blylst Assention day

In the cherful month of May;

And took my jorney hense to Heven.

Among the families known to have lived in Snodland in early times, that called ‘Holloway’ is prominent. It presumably took its name from ‘Hollow Way’ and must, at least at some time, have owned the property at Holborough latterly called ‘Holloway Court’. This was a house situated near the mill, slightly to the north-west, and separated from it by the road leading up to the Pilgrim’s Way. (In later years this was closed off and replaced by ‘New Road’, now called ‘Ladd’s Lane’.) There are recorded:

By the 1460s this John Holway owned ‘Newhouse’ (which we know as ‘Woodlands Farm’) and other properties. A seventeenth century list of deeds records this and notes the transfer of ownership of his houses and lands between 1468 and 1522. Meanwhile the farm called ‘Holloway’ had passed to William Alisander by 1469.

William Alisander was clearly a man of substance – and of piety. By his will, dated 15 January 1470, he asked to be buried in the porch of Snodland church. The large stone in front of the inner door may be his grave and it is likely that the brass indent on the east wall above is also his. He left money to pay the rectors of Snodland and Northfleet for a year’s supply each of consecrated bread and wine; for a priest to say daily services for two years; for the Augustinian Friars, the Minorites and Carmelites in London, the Carmelites at Aylesford, and the monks at Canterbury each to say 100 masses for the souls of his father and mother, himself and his wife, and of John Lowe, late Bishop of Rochester. The Prior at Canterbury received from him a gold ring with a sapphire set in it, and silver cups were presented to Canterbury, Malling Abbey, and Higham Priory. The rector at Stone received a cup of maple covered with gem-stones with silver and gilt, weighing 16½ ounces, and the Archdeacon at Rochester some books. Curiously, there is no mention in his will of his charity (still announced on the charity board in the church) providing a weekly portion of bread to the poor ‘for ever’. The Alisander family may have moved to Snodland from the Northfleet area, but records of them are very sparse. William’s wife was Elizabeth Philip, sister of John (d. 1461). The wills of William and his son Geoffrey help us to construct a family tree 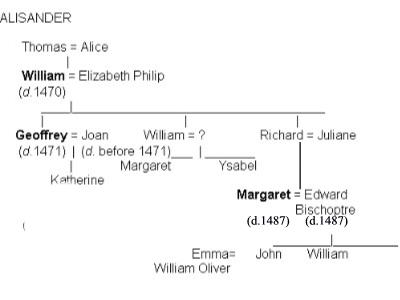 This is useful in determining what happened to ‘Holloways’ and to the adjacent farm called ‘Nasshenden’. William bequeathed ‘to Geoffrey my son all household goods, beds and bedlinnen, etc., which I have in my tenements of holweys and nasshynden, with all ironwork and other instruments which I have in the forge of Robert Parmenter’ (who clearly was the blacksmith). His son William received ‘my entire white bed (in Nasshynden) dyed with flowers.’; Juliane had ‘a dress of red russet decorated with silver and gilt’; her daughter Margaret acquired silver spoons and a bed.

Geoffrey did not long survive his father. He made his will on 19 September 1471, describing himself as ‘gentleman’. His property in Snodland, Halling, Paddlesworth and Hadlow was to go to his daughter Katherine once she reached the age of fourteen; in the meantime his brother William was to receive the rents. Katherine was also to receive all his moveable goods, cattle and jewels. Sadly, it seems likely that she died before her fourteenth birthday, for, in the event of her death, the will made provision for the property to descend to others who can be shown to have owned it. If Katherine died, wrote Geoffrey, Margaret Bischoptre ‘shall have my tenement … at Holbergh … called Nasshinden’ (with about 25 acres of land), while brother William ‘shall have my tenement at Holbergh which was formerly John Olwey’s [= Holoway’s]’, its land and another cottage. Of William Alisander the younger we hear nothing more, but Margaret Bischoptre made a will on 13 November 1487, three days before her death. She was then living at Addington. (Her husband Edward had died on 1 September and both are commemorated in a marvellous brass in the north aisle of All Saints church. Her son William was to inherit the Snodland property at the age of 22 years, but in the event of his death, her executors were authorised to sell it. Again, this seems to have come to pass and we next hear of Holloway and Nasshenden as belonging to the Tilghman family.