MEMORIALS IN ALL SAINTS CHURCH 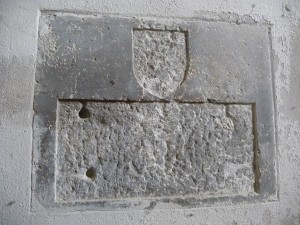 [East Wall] Lost. Described (with a sketch) before 1633 by John Philipot, British Library, Harley MS 3917, f.71, and by John Weaver, Ancient Funerall Monuments, 1631. The gravestone is on the floor south of the inner door of the porch.

Drawing of this fragment of a gravestone is in British Library, Add. MS 32372. Probably memorial for John de Dentonne, Rector of Snodland, d.1341. 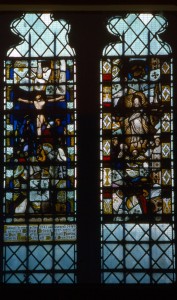 Fragments from several windows destroyed when a land mine exploded nearby in 1941.

“Pray for the soules of William Tilghman thelder Isabell & Joane his wyves, which William decessyd the xxvij day of August Ano dni mocccccoxli, on whose soules Jesu haue mrcy As you ar so was I, and as I am so shall you be”

7. [East wall of nave]  Lost. Recorded by John Thorpe, Registrum Roffense, 1769. On the East wall, on an achievement, are these arms, viz. Parted per fesse, gules [should be “sable”?] and argent, a lion rampant double quivee regardant counterchanged, impaling argent a bear rampant sable, a canton gules.

This must have been a memorial to the first wife of William Tylghman “the younger” d.1593. His arms are impaling those of John Beere of Rochester [pun for Beere/Bear] whose daughter Mary he married. She was the first of his four wives, only the last two of whom appear in the registers.

Possibly father or other relative to John Perot, Rector of Snodland

“To the memory of Thomas Fletcher Waghorn Lieut. R.N. who by extraordinary abilities and self devotedness became one of the greatest benefactors to his country by exploring and bringing to perfection the short overland route to the East Indies. He entered the Royal Navy at the age of 12 years and served as midshipman in the Bahama under Captain Wilson. He was afterwards engaged in the Bengal Pilot Service. This first suggested the utility of the overland route and enables him to acquire the knowledge necessary for bringing the great undertaking to perfection which he did under circumstances of peculiar difficulties and discouragement in the year 1841. Nothing could exceed the perseverance energy and untiring vigilance of this high spirited officer when on duty or his warmth of heart and most kindly feelings in private life. He died January 7th 1850 aged 49 years. This tablet was erected by his disconsolate widow who felt much supported under her heavy bereavement by the assurance that those “whom the Lord loveth he chasteneth and scourgeth every son whom he receiveth”.

Following Waghorn’s death an appeal was made in The Times and local newspapers for subscriptions towards a memorial window to him. Evidently there was too little support for this to proceed. 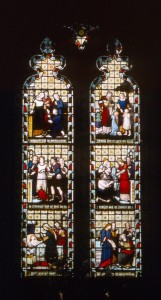 She was the daughter of William Lee and widow of Captain William Henry Roberts (1817-1848) of the Royal Engineers.

11. [Formerly in North aisle] Lost, but parts salvaged and re-instated in windows in West wall [see 3 and 4 above]. ‘Window in two lights representing the Crucifixion and the Ascension’ inscribed “This window was placed by his bereaved wife to the endeared memory of Captain W. H. Roberts, Royal Engineers, a most affectionate and beloved husband, A.D.1848″ 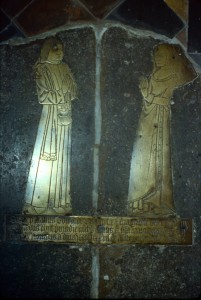 “Pray for the souls of Edward Bischoptre and Margaret his wife, which Edward died 1 September and the said Margaret died 16 November 1487, on whose souls may God have mercy.” 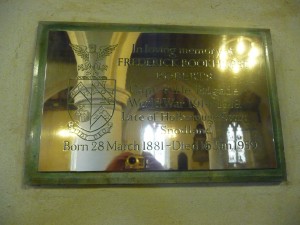 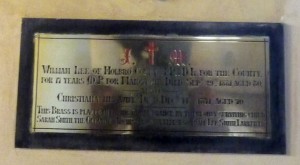 This brass placed in loving remembrance by their only surviving child Sarah Smith of The Gleanings, Rochester & her eldest son Saml. Lee Smith.

15. ”North wall. White marble shield on black background. “Sacred to the beloved memory of Samuel Lee of Holborough who departed this life August 15th 1852 aged 26 years. Blessed are they that Mourn, for they shall be Comforted. 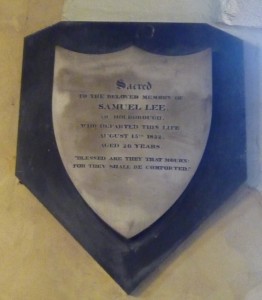 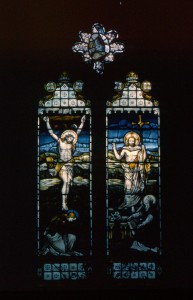 16. Window by Heaton and Butler, representing the Crucifixion and the Resurrection, erected by public subscription “In memory of J. G. le Marchant Carey, M.A., for eight years Rector of the parish, obiit March 17, ‘85”.

Carey moved to Colchester and became Archdeacon of Essex.

Chancel. [North wall] Nov. 18th 1881 “A window has been erected in this church to the glory of God and in loving memory of the late Archdeacon Carey M.A. for eight years Rector of this parish.”

Partially revealed in 2002 when a trench was dug for the central heating. 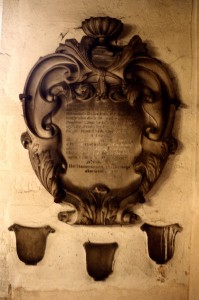 18. [North wall] Here lyeth the body of Martha eldest daughter of John Baynard late of Shone in the county of Kent, gent. First married to Bonham Faunce of St Margaret’s Rochester, gent. By whom shee had issue which survived her: two daughters viz Mary her eldest married to William Man of the city of Canterbury, Esq., and Martha her second daughter married to John Cropley of St Margaret’s Rochester, Esq. Shee was afterwards married to Richard Mankey of Holloway Court in this parish, Esq., by whom she also left issue surviving her viz one son Charles and one daughter Frances. Shee died the 29th day of March anno domini 1682 in the 58th year of her age.

The memorial is considered to be by Arnold Quellin (1653-1686), partner of Grinling Gibbons. Thorpe, Registrum Roffense (1769) adds the following:

“By the sides of the said monument are these arms viz.

I. Argent, a right hand couped sable, impaling sable a fesse between two chevrons, Or.

III. Argent, three lions sable, each gorged with a crown Or, impaling sable a fesse between two chevrons Or.

[These cannot be the three shields below the monument, which are blank.]

Under the foregoing monument, on a grave stone, is the following inscription, 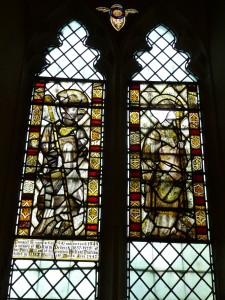 19. [East window of North Aisle]. The Palmer window [no. 4 above] was originally here. The original mediaeval glass is mostly lost, but was painted by Charles Winston (1804-1864) in the 1840s (now British Library Add. MS 35211 II). Winston’s paintings can be seen at www.cvma.ac.uk under Snodland

20. [Chancel] Lost. John Thorpe, in his Registrum Roffense (1769), noted that in the chancel “on a gravestone (the inscription lost) are these arms, viz. on brass:

I. A chevron between three palmers scrips, with strings and tassels. [These are the PALMER arms]. 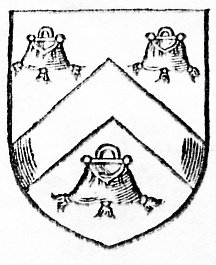 This was drawn by John Philipot in British Library Harley MS 3917. The arms shown here are from John Weaver’s Ancient Funerall Monuments, 1631. Just once, in the 1390’s, these impaled arms (implying husband and wife) are attributed to a Richard Fitz-Symond, so it would seem as if this too was the lost Thomas Palmer memorial since he married a daughter of a Fitz-Symond. 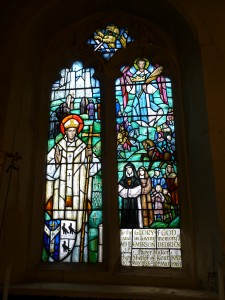 21. T0 the glory of God and in loving memory of William Emerson Dedrick J.P. papermaker, High Sheriff of Kent 1952.

“The Church of All Saints is an ancient foundation and stands on the old Pilgrim’s Way. The window has been designed to commemorate these pilgrimages to the shrine of St. Thomas a Becket at Canterbury. The left light shows St. Thomas vested as Archbishop, with the Arms of the See of Canterbury impaled with his personal arms, three Cornish choughs. At the head of the light is the Cathedral with pilgrims approaching. The right hand light shows above, an angel holding the emblems of martyrdom, the crown and the palm, and beneath, a procession of pilgrims: in the foreground, at their head, is shown the sister of St. Thomas, who was abbess of Barking. The Dedrick crest is shown in the top tracery.

The glass of this window is of fine colour and quality, much of it a precious “slab” glass no longer obtainable. The old stonework of the window is irregular in shape and has necessitated careful handling.”

Here lies Thomas Dalby, formerly rector of this church, who died on 6 October 1472, on whose soul may God have mercy.”

A drawing of the brass, once ‘in the church chest’ is in British Library, Add. MS 32,372. D. A. Briton, Summer Wanderings in the Neighbourhood of Maidstone, Kent (Camberwell, 1829) described it as a “large slab of reddish stone with a cross flory carved upon it’” 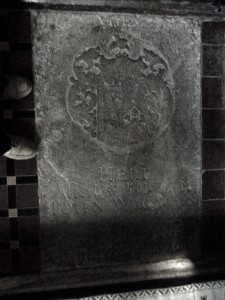 “On a gravestone are these arms, viz. a bend ermine, in chief a dog, all within a border, impaling on a chevron three unicorns heads erased, and the crest a dragon holding a spear in his mouth; with this inscription. 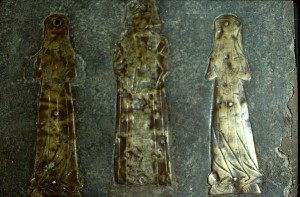 The attempt to marry this with the Tilghman memorial (no. 6) seems wrong, but the identity of the people remains unknown.